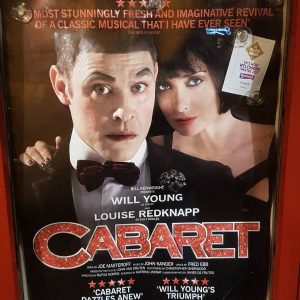 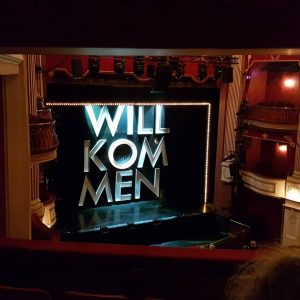 Cabaret is the Musical, Music John Kander Lyrics Fred Ebb,  book by Joe Masteroff based on John Van Druten’s play “I am Camera”. The original production was on Broadway and openned 20th November 1966.

In 1972 it was made into the famous film starring Liza Minnelli “Sally Bowles”, Michael York “Brian Roberts” and Joel Gray “Master of Ceremonies”

This is certainly a ‘harder edged’ production, I’ve seen it twice before in London once with Will Young as “Emcee”. As a result I knew what to expect, more than can be said for some of my fellow audience members. Who appeared a little shocked byThe nudity, and more violent edge to the story. It for me is all the better and more moving for the realism.

I thought Louise Redknapp was excellent in the role, the right combination of sexy, needy and decadent. With a great singing voice and whose dancing has come on no end 🙂

Will Young is great in the role, not the pop star, not the personality, but a great actor who becomes the menacing master of ceremonies carrying and driving the story along.

My favourite songs in the show are: ‘Maybe this time’, ‘Tomorrow belongs to me’ (very disturbing in this setting) and ‘Cabaret’

For me the only problem was the sound, with the band being on stage, behind the action, the mix meant that it was difficult to understand (especially) Will Young with his very good but strong German accent.

I would still strongly recommend this production. It’s still on tour around the country, see if it’s coming near to you.