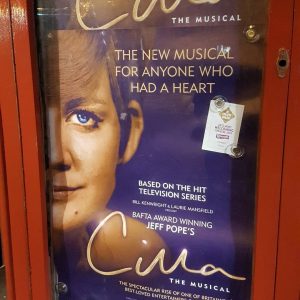 This is a new musical based on the TV series (itself) based on the early life of “Our Cilla” Cilla Black. The BAFTA award winning TV series was written by Jeff Pope, this production is produced by Bill Kenwright (who else for a touring musical these days) and Laurie Mansfield, it was directed by Bill Kenwright and Bob Tomson and the executive producer was Robert Willis (Cilla’s son)

The musical, as the TV series did covers the period from just before Cilla was discovered by Brian Epstein until her first TV series.

Now I loved the TV series and Sheridan Smith was brilliant in the role, but there wasn’t THAT much music in it, so I was intrigued to see how they would fill the show, very cleverly is the answer but more of that later.

The casting for the lead was done via open auditions, any female could audition, although in the end the person chosen to play Cilla did have previous performance experience, having been in shows as a child, appeared on Britain’s Got Talent as part of a ‘girl’ band Zyrah Rose and who had trained professionally at the Central School of Speech and Drama.

So to the show, all your favourite Cilla songs are included, and this is a great feel good show, the extra music is supplied by the songs of the time, primarily from the Beatles, but also Gerry and the Pacemakers and the Mamas and Papas. Played live by the very talented cast, these songs drive the story forward with the live performances or recording sessions providing the slots for Cilla’s songs.

Now those songs, I mean Cilla is known for her ability to Belt out a tune, and I have to say from the first few bars of the first song I knew we were in safe hands with Kara! She was excellent, her performances of “Anyone who had a heart”, “You’re my world” and “Alfie” were sublime.

This is a jukebox musical, and I have no qualms in using that phrase as I am using it not in a derogatory way, but it literally covers the music you would find on a jukebox. It features the catalogue of a specific artist, supplemented by some of the other music around at the time.

It’s a great feel good show, with excellent performances from all involved. Go and see it if you get the chance, as if, like me, you love the music of the ‘swinging sixties’ you will have a ball, as those around me seemed to do on the night I saw it.