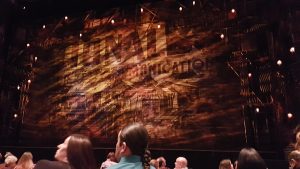 The current (as of May 2018) tour of Miss Saigon came to Cardiff a few months ago, and of course “I was there” in fact I was there 3 times!

If you’ve got here you have almost definitely seen the rest of my site and know I am a complete Miss Saigon addict. So in many many places on this site you can find reviews of the show, the songs and the wonder that is THE show for me.

So for this entry I thought I’d tell you about the current Tour and how it differs from previous productions and also concentrate on the cast I saw.

My first visit was on the second night after the show opened at the Millennium centre, now this was either an oversight on my part (unlikely) or they moved the ‘premier’ a night forward, as I was planning to be there for the first night.

So 30th November 2017 and I’m in my seat. There’s an extra connection to the show this time, as I’d heard a few months before that a friend’s nephew was in the cast, but more of him later.

This is the ‘new’ production, a hybrid of the recent Prince Edward West End show and the latest international tour. So yes the helicopter is there! Also for me there didn’t look any ‘scaling down’ in evidence, it was as spectacular as it’s always been.

So (as expected) I loved the show! With Red Conception as “The Engineer” leading a brilliant cast in a moving telling of a great story. Now I will admit I didn’t notice the board saying who was playing which role at this initial performance, so I’ll amalgamate the 3 times I saw the show when talking about the cast:

I saw both Sooha Kim and Joreen Bautista as ‘Kim’ and they were both brilliant, the latter at only 17 and tiny was a revelation, bringing the fragility of the character to the fore with with, as Claude-Michel Schönberg said whilst looking for the original ‘Kim’, lungs of steel. Ashley Gilmour plays ‘Chris’, Ryan O’Gorman ‘John’ and Zoe Doano ‘Ellen’. Now I saw alternates at some of the performances but I must say none of them were out of place in the role and all deserve to play the lead as often as possible.

I must talk about one particular alternate. So there I was sitting at my desk in work about 15 minutes from finishing when I get a message on my phone .. “He’s on as Chris!” Now this was brilliant as it was from my friend telling me her nephew Tom Hier was playing Chris for (I Believe) the first time on the tour and at his ‘home town’ (well 25 miles from it anyway!) So after sending a congratulation reply I immediately followed it with another … “any chance he could get me a ticket?” After a nervous wait the reply comes back, “it’s at the box office for you”. Now that was great, only slight fly in the ointment being this was December the weather was terrible, it was now gone 5:30 with a 7:30 curtain up, so … fly home, quick change, head out, fight the traffic and … I get there with 25 mins to spare.

Now I hadn’t seen Tom perform before although I knew he had been first cover ‘Joseph’ in the last tour, playing the role on many occasions, and was also a featured performer with Only Men Aloud. So I knew the role was in safe hands. Oh and as the ticket was a “cast seat” I got it for 50% of the normal cost! Winner. So I sit down a few seats from the conductor of Only Men Aloud who had left his Christmas Party early to see the show and we were treated to a Brilliant performance from a very talented young man, and the wonderful cast.

So after this unexpected extra performance I had my last (at this venue) ticket for the 3rd January, one of the last shows, and I again managed to get a Cast Seat so my bank balance didn’t take such a belting.

Now in between these two shows, I had a BRILLIANT Christmas, as my friend sent me another message saying “are you at home” and “will you be there for the next 10 minutes”, so intrigued I replied yeah, and when she arrived I couldn’t believe it, Tom had got the whole cast to sign a poster wishing me a Merry Christmas, so this is now stored safely till I can get a suitable frame to display it.

So if you get the chance go and see Miss Saigon, it’s still on tour and is without doubt one of the best nights you’ll ever have in the theatre. 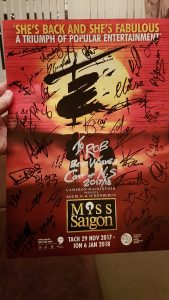 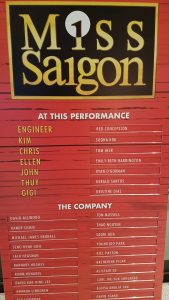