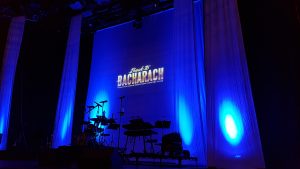 Back to Bacharach is a Tribute show for one of the 20th Century’s greatest composers. His ‘lush’ style makes his compositions stand out and indeed stand the test of time. This year Mr Bacharach is 90 years old and his catalogue is, to say the least, varied!

This show consists of 3 female and one Male singers, with a live band the Magic Moments Orchestra, who manage to capture the wonderful spirit of a wide range of songs.

Now there’s no special effects in this show, there is a large screen at the rear of the stage but it merely displays the name of the show. This show is really one for music fans, as the band and singers merge wonderfully to transport you through a wide range of feelings, locations and memories.

Now I would be surprised to find anyone who doesn’t know at least one Bacharach and David (as to be fair we must also mention Hal David Burt’s long time composing partner) number. As they include: ‘Alfie’, ‘What the Word Needs Now’, ‘I say a little prayer’, ‘The Look of Love’, ’24 hours from Tulsa’ and ‘I’ll never fall in love again’. They’ve featured in movies such as “What’s New Pussycat” (title track), “Butch Cassidy and the Sundance Kid” ‘Raindrops keep falling on my head’ and of course as mentioned above ‘Alfie’.

Now, I may have one of these names wrong, as the one lady performing looked very different from the photo in the programme. But here goes: Martin Neely, Chloe Du Pre, (I believe) Janine Johnson and Arabella Rodrigo with musical director David Foster.

Stand out numbers for me included: ‘A House is Not a Home’ by Chloe which she accompanied herself on piano for a brilliant version of this slightly lesser known song and ‘What the World Needs Now’, although to be honest, there were no let downs for me, and I even learned something, that Burt wrote a song recorded by my favourite Singer ever Elvis Presley ‘Any Day Now’.

A really great show performed by top class performers and musicians and featuring a varied range of numbers by a true giant of popular music. Catch it on it’s tour, well worth a visit.