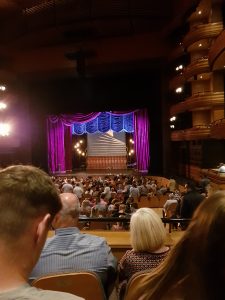 Now this is going to be a short review, as to quote a hashtag from The Cursed Child, #KeepTheSecrets. Derren asks that anyone reviewing the show doesn’t give away any of it’s secrets.

Now I will admit to being a little nervous going to see this show, as the phrase “audience participation” strikes fear to my very bones! So having seen his TV shows I knew that the audience featured heavily. Now to put similarly afflicted entertainment seekers minds to rest, you don’t HAVE to take part, just dodge the flying Frisbee and don’t volunteer and you can just marvel at the skills of this master manipulator. I also took the chance to sit a little further back than I normally would.

When you enter the auditorium your greeted with a ‘Victorian’ style stage (see photo above). Also if you enter early you get another chance to participate, I didn’t and I won’t spoil it by explaining further.

Derren freely admits what he does is not magic, and he is “honest about his dishonesty” he manipulates the audience through misdirection, hypnosis and other skills. I will say this was one of the most entertaining evenings I’ve ever had in a theatre. As did most of the audience I left scratching my head and trying to figure out what I had just seen, or more to the point how the hell he did what I’d just seen.

Derren the man is disarming and surprisingly honest for someone who spends the night conning us all. Sharing secrets about himself and chatting with a disarming quality that makes you feel that he is talking just to you.

As the show is a “Best of” you know, if you’re a fan that it will feature some illusions you’ve seen before, but it doesn’t stop you from still being amazed.

The tour continues and I would whole heartedly recommend you go an be amazed!