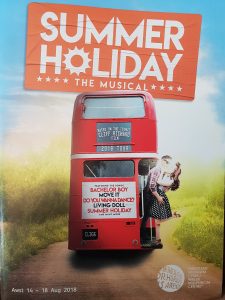 So if you’ve ever read any of my previous reviews then you will know I very rarely write a negative review, and this is, at least partially, going to be one.

Summer Holiday is one of the first ‘Film to Stage’ shows, pre-dating the popular recent trend by around 20 years, as I first saw the show in the late 1990s.

The story is about a group of London Transport Bus mechanics who manage to get permission to take a big red London Double Decker across to Europe for their holidays. On the way they meet a group of girl singers who are stranded when their car breaks down and agree to take them to their first performance in Athens. There is also Barbara a (slightly) famous singer who’s career is run by her domineering mother. Barbara decides to run away, she stows away on the bus and pretends to be a little boy!

Then as they say fun ensues!

So for me the performers were very good, giving their all to the musical numbers and the very energetic choreography. They deliver the comedy with great timing and all in all this is a fun, easy going, feel good show. Ray Quinn is a likeable personality who can definitely sing and dance, he won the Dancing on Ice TV series a few years ago. He does a slightly weird posh accent in the show, and stylised some of the numbers giving them a slight “swing” feel, that for me, was miss-placed. The other cast were right on the 60s vibe.

So why did I start this review saying it was going to be negative? Well, I was sitting in the front row, now I do this quite often, as at 6 foot 3 I don’t have any problems seeing the stage, and I think it can help to immerse yourself in the performance, but for the first time I can remember I had a problem with the sound mix.

I mean I was literally sitting above the brass section (1 trumpet, 1 trombone) so it was obviously going to be “brass heavy” for me, but I noticed when I walked in a significant lack of visible speakers at the stage edge, and this proved to be a problem. I was struggling to hear the singers over the orchestra. Now I was thinking maybe it was my fault being right at the front,which was actually behind the main stage speakers. However during the interval I heard other people sitting further back complaining that they had the same problem. Then upon reading other reviews I see that the complaint has been made at other venues too. So one could assume that the producers may have decided to cut costs by working with the smallest possible sound system, and this is proving insufficient in larger venues.

This really is a shame, as I say this is a good show and a nice evening out, let down by the technical side.

Oh and it also doesn’t help that they removed my favourite song from the show! I really love “I’m in Love with you” which featured in the earlier production I saw. The show does however feature: “Summer Holiday”, “Bachelor Boy”, “Foot Tapper”, “Living Doll”, “The Next Time” and many more Cliff hits. So all in all a fun show, worth seeing, although don’t sit at the very front and hopefully the sound mix will work for you.