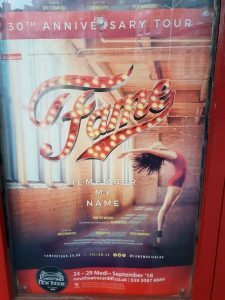 This is the latest (30th Anniversary) touring production of the show based on the 1980 movie. Oh and not so much on the TV series, I say this as it definitely has a harder edge, so in my opinion not suitable for younger children.

It tells of a group of students who start at the New York High School for Performing Arts (The Fame School). They reference the show / film at the start saying something like “they all come here with dreams of dancing on Taxis dowwn 45th street …”

The only song from the movie / series is ‘Fame’. All other songs are original for this show.

The staging of this production is great, with a large set made up of “headshots” (the portraits performers use to send to agents / producers.) full height of the stage and on multiple levels and this acts as the “walls” as other props are moved in and out for different scenes.

The performances in the show were brilliant. I saw an earlier tour many years ago and really enjoyed it. However the current cast were exceptional, especially deserving of mention were Mica Paris who had the showstopper ‘These are my children’, another performance I found terrifically moving was Simon Anthony as ‘Schlomo’ and his introduction of the Graduation, (no Spoilers). The other person I couldn’t take my eyes off was Stephanie Rojas, her wonderful performance as a person ground down over time by drugs and bad choices.

Favourite numbers for me included: “These are my Children”, “I want to make Magic” “Let’s play a love scene” and “Bring on Tomorrow”.

A great show which as you can probably tell I thoroughly enjoyed, and which after the remaining dates of it’s tour has obtained a West End transfer. Go and see it if you get a chance … and don’t forget your leg warmers!