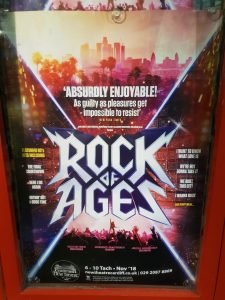 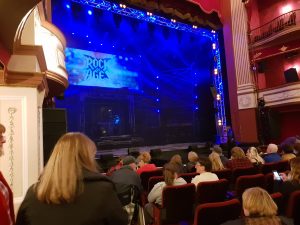 This raucous, raunchy musical is a great, funny, feel good night out, if you’re of a generation who remember this music, or who just enjoy power ballads, and lots and lots of hair and that’s just the guys!

It tells the tale of ‘Drew’ Luke Walsh and ‘Sherrie’ Danielle Hope, two young hopefuls who after arriving in L.A. meet at the Bourbon Rooms where they end up working behind the bar whist waiting for their big breaks.

You also have ‘Dennis’ and ‘Lonny’ who own the Bourbon Rooms, a bar on L.A.’s Sunset Strip, ‘Stacee Jaxx a self centred, egotistical rock star who may be the only person who could save ‘The Strip’ and developers ‘Franz and his son ‘Hurtz’ who want to demolish it and build a shopping mall development. There’s also ‘Justice’ the owner of a gentleman’s club on the strip.

This is a love story, told using 80s power ballads of the Rock genre. Songs that feature include: “Don’t stop believing”, “The Final Countdown”, “Waiting for a girl like you” and “We built this city”.

This show really is almost the definition of a “feel good” show, I mean the story is …. vague! 🙂 But it doesn’t matter we have a narrator ‘Lonny’ (wonderfully played on this tour by Lucas Rush) who frequently breaks the fourth wall to give updates, explain scenes or merely chat up a young lady in the front row! Rebecca on the night I was there 🙂

This is definitely a naughty show, I mean I’m sure the two families of (I would guess) 8 year olds I saw in the interval MAY have regretted bringing them, I mean they (the 8 years olds) must have spent most of the show explaining things to their parents.

I’d seen the show a few times before in the West End, and I really enjoyed it. I must say the touring production doesn’t seem pared back in any way. The choreography and performances were, without doubt of West End standard. The (mostly on stage) band drove the numbers with suitable gusto, all power chords and drums.

For me stand out performances were: Danielle Hope ‘Sherrie’, Lucas Rush ‘Lonny’, Zoe Birkett ‘Justice’ and Kevin Kennedy ‘Dennis’ oh and special mention for Erin Bell ‘Constance’ a smaller part but a Lady that made a true impression, not only for her costumes (such as they were 😉 ) but a great performance with excellent comic timing too, I am sure she’s one to watch.

If you get chance to catch this show, which tours well into 2019 go and see it, I hope to when it gets back to Wales next May.