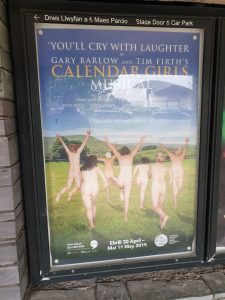 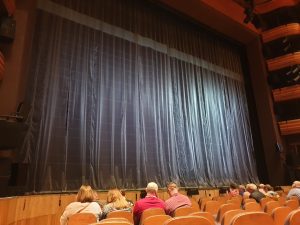 Calendar Girls is a musical by Gary Barlow and Tim Firth. Directed by Matt Ryan. The cast when I saw it included: Sarah Jane Buckley, Sue Devaney, Julia Hills, Judy Holt, Lesley Joseph, Lisa Maxwell and Rebecca Storm, plus a full supporting cast as the husbands, children and other villagers.

I saw this production on its opening night. It is, as I mentioned a musical based on a play based on a film (released in 2003). I think I have that order right. I know there definitely was a film and I’ve seen a play so the lineage is correct, just maybe not the chronology.

This incarnation had a West End run, all too short in my opinion, opening in London in January 2016, after it’s premier in the Grand Theatre Leeds in 2015. At this time the show was called “The Girls” One would assume the name change for the tour was to ensure as much ‘brand awareness’ as possible.

Now I will say, as a person who has lost way too many members of his immediate and extended family to the horrible disease that Cancer is, I did think before booking this show. However, to anyone who likes musicals, go and see this show! Yes it is without doubt moving, and I will admit to welling up in places. However it is also very funny, extremely well performed by the ladies mentioned above together with all the supporting cast. It is to use a well worn phrase life affirming, seeing how, what we have to remember were a group of real ladies, rallied round to try and help one of their group to live through what was a terrible time in her life.

For those who don’t know, …. and obligatory SPOILERS warning here…..The story is about…..

a group of ladies, all members of the Knapely Women’s Institute (WI). When ‘Annie Clarke’ loses her husband ‘John’ to leukaemia her best friend ‘Chris’ decides they will do something to raise money to buy a sofa for the visitors room at the local hospital. That is to make a Calendar, a ‘nude’ calendar. Not what immediately springs to mind when you hear the letters W I.

I have to say this is a show best seen live. It may not have, at least for me, songs you will play on repeat as a cast album. However seen in context and performed by this supremely talented cast, it is classic musical theatre. The songs drive the narrative, the cast drive the show, and the show, at least again in my case, moves the audience.

It was almost full when I attended, but I believe tickets are available for most if not all future performances, and the tour continues after this venue.

Special mention I believe needs to be given to Lesley Joseph as the ‘older’ retired school teacher, Lisa Maxwell and Sue Devaney, but then the two best friends Rebecca Storm and Sarah Jane Buckley were also great. This is not to say the other ladies weren’t great, but for me these ladies were really given opportunities to really shine in the story.

Stand out songs for me included ‘Yorkshire’, ‘Sunflower’ and ‘For One Night Only’.

So a really moving, entertaining and for me unexpectedly very very funny show. Go and see it, you won’t be disappointed.