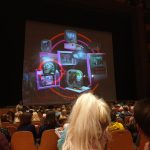 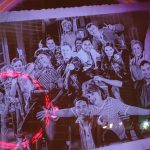 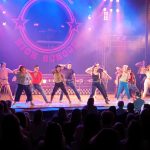 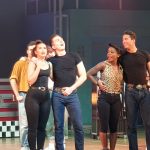 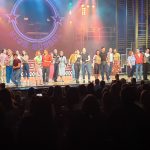 Well I can honestly say Grease is Still the word.

Okay a quick history lesson. Most people have heard of Grease, and a lot know it was a movie, but that movie was based on a musical that was performed on stage on Broadway and in London. To throw some names at you the original ‘Danny Zuko’ on Broadway was Barry Bostwick (‘Brad‘ from Rocky Horror Show), and in London (one of if not the) first Danny was a struggling young actor called Richard Gere, oh and Elaine Paige was in an early West End cast too.

But I digress, this new tour, the last week of which is at the Millennium Centre this week, don’t worry they’ve extended it and it goes back on the road next year. Is sold as ‘grittier and more glamorous’. Well I can say the set and production is great nothing lacking in the colour or scale of this tour. I can’t say I saw anything particularly “grittier” than previous shows, although maybe someone who had only seen the movie may have spotted a harder edge.

The cast were great. Stand outs for me were Martha Kirby as ‘Sandy’, Rhianne-Louise McCaulsky as ‘Rizzo’ and Darren Bennett as ‘Vince Fontaine’, although to be honest the whole cast coalesced into a great story telling unit, and most of the lead characters got their own moment with a song.

Now I saw a fair bit of publicity around ‘Name selling’ i.e. various celebrities playing the role of ‘Teen Angel’ (at different locations: Peter Andre, Samantha Mumba or Ore Oduba), but when I saw it the role was played by Darren Bennett which for me works as ‘Frenchie’ is dreaming of someone to take her problems away, so the idea of a ‘famous’ local DJ being who she imagines / dream of works. Also Darren is great in this show, all swagger and posing, with a great sense of comic timing. Oh and if you’re female and pretty and sat in the middle of the front row, then be prepared to be (not quite) part of the show!

Stand out numbers were: “There are worse things I could do”, “Summer Nights” “Mooning” and “Hopelessly Devoted to You”. For me the only slight let down, and this is based on previous stage productions I’ve seen, is they ‘threw away’ a great bit of business as comics call it with “Those Magic Changes”, although to be fair if you haven’t seen the previous productions then you wouldn’t miss it as it doesn’t detract from the story telling at all.

I’ve read a number of reviews saying they didn’t like the way ‘Sandy’ has to change her morals to be accepted, now for me there’s two things about this: one (although unusually not in this production) Danny changes too, and two why does it seem that everything needs to reflect modern accepted norms and be taken literally, I mean this is a piece of entertainment, not a “how to” manual on teenage lifestyles.

It’s a fun, entertaining night out and I really enjoyed it. If you get chance check it out at the Millennium Centre until the 19th October, or keep an eye out for new dates / venues for next year.