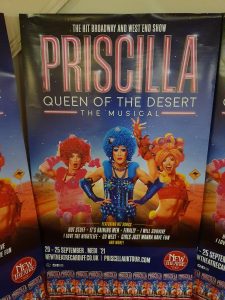 Now I will give my usual proviso before I start my review. The names listed above were on the provided cast sheet and no announcements were made so that’s who I believe I saw last night.

Priscilla is a jukebox musical based on the 1994 movie “The Adventures of Priscilla, Queen of the Desert”. The original production opened in Australia in 2006 and I first saw the show at the Palace Theatre in London in around 2009/10.

It tells the story of ‘Tick’ a drag queen in Sydney who has a wife and son who live in a Alice Springs. Tick’s wife works in a casino and asks him to come and visit his son who he hasn’t seen for years, and at the same time put on a drag show there. So joined by a fellow drag queen ‘Felicia’ or Adam and a trans ex- les girls performer and friend Bernadette they set off across Australia in an old bus they christen Priscilla. The show is this journey and how it changes them and those they come into contact with. Along the way they encounter homophobia, make friends and learn more about each other.

This really is a great feel good show. It’s funny, has some great performances and songs.

I should also say at the outset it does also require you to have quite a high tolerance for what used to be described as “near the knuckle” humour. Although in this case I would say it would better be described as nearer the shoulder than the knuckle! 😮

The diverse cast in this production give it everything. Performing songs live, playing various roles and acting as ‘stage crew’ in a number of the routines too.

Now yes the titular Priscilla isn’t quite as impressive as the one I saw in London, which changed colour due to in-built light screens, but you can’t expect it to be, as that one lived on the stage and this one has to travel venue to venue. This version does however act as a flexible focus for the stage and also adapts to act as other locations at various points.

Special mention should go to the “Divas” who sing a lot of the songs in the show and three very impressive ladies they are to, with vocals that can pin you into your seat.

The leads all play the roles with gusto and provide, if such a thing was needed, proof that there is a range of ‘drag’ performers the same as both Michael Ball and Lemmy from Motorhead are singers, both great at what they do but unlikely to be mistaken for each other.

Stand out numbers for me included: (my favourite) MacArthur Park, Colour my World, The Morning After and I Will Survive, well come on you can not have a drag musical that didn’t feature I will survive!

So, locally at least, this was my first musical back. I mean I’d been to London and seen 6 shows in 4 days. But near home where I just went to the theatre, saw a show and went home this was the first one since lockdown. A very long, almost 2 years.

I really enjoyed the show and have to say the enforced absence really made me appreciate it all the more. I mean, to see performers doing what they do best, live and the band were phenomenal. It was so great to be back in a audience of like minded fans seeing live theatre. Even if a few of them seemed to have partaken a little more of the ‘happy juice’ before taking their seats. It wasn’t BAD but there were a few who had forgotten that at least we need our “indoor voice” or preferably not even that whilst the show is going on. But all in all we had a great time. 🙂

Strangely there was no merchandise what so ever. Nothing, not even a programme. Now I know even their website mentions a previous iteration of the cast, but as even West End shows use brochures with previous cast photos in them I found this a bit strange.

Oh and the venue, the New Theatre Cardiff is now contactless / card only. No cash accepted. Just in case you’re heading there and wanted to spend ‘real money’.

Starting something new with this review. Adding “view from my seat”, for those interested. So this was my view from row L16 in the stalls. 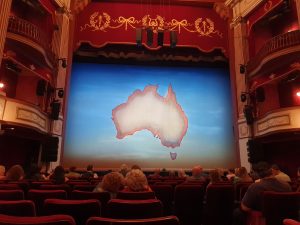