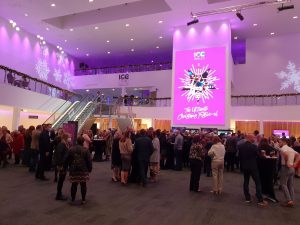 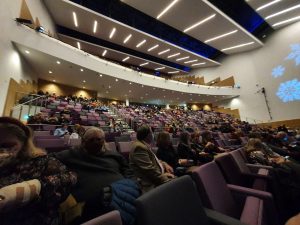 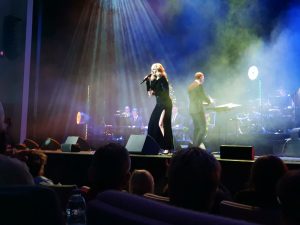 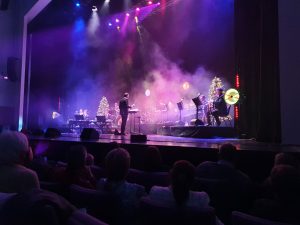 This is another ‘Songs from the shows’ evening put on by Live Under the Stars (who also put on the Bring Them Home show I saw back in August). Although with a heavily Christmas themed slant.

Performing were: Kerry Ellis, and the Welsh of the West End (all performers from Wales who have performed in the West End and who became an online sensation during lockdown by recording musical theatre songs that were uploaded to YouTube). They were:Steffan Hughes (who also started the project), Mared Williams, Jade Davies and Tom Hier.

This was also the first time I’d been to this new venue. It opened in late 2019, basically just before the world shut down! So as it turned out we were the biggest audience they’d ever had for a performance.

Unfortunately it showed. I mean the signage to the car parks was so bad I ended up as I turned into the venue being faced by a stream of cars trying to get back out, then heading mistakenly into a private car park, hence becoming one of said stream of cars heading towards other people trying to get in, then parking at what was a car park .. just not THE car park I needed.

Eventually I got to the correct location, an underground car park underneath the venue itself. Upon entering I walked in behind the people doing the Covid Pass and ticket checks, who didn’t even see us.

Then the seat I’d specifically booked on the end of a row, I usually need the leg room, turned out to be ‘blocked in’ by a high walkway directly to my right, not shown on the seating plan.

Next I was part of what was literally the longest show delay in over 30 years of going to the theatre, over 35 minutes, with no notifications / announcements or updates of any kind.

Finally when I left there was one working car park pay machine, joining a queue of over 40 people and way more than that behind me. I was relieved to be told “they’ve opened the barriers you just drive out”. Which I did only later worrying that it was a member of the public who said that. Luckily when I checked they did confirm that the parking fee had been waived.

So all that being said I will give them the benefit of the doubt and go to see another show there, as hopefully it was just teething problems.

However, on the positive side the show was great.

The uber-talented cast delivered a wide range of musical theatre standards and great Christmas songs to get you in the mood for the big day. All backed by the Novello Orchestra under the baton of David Mahoney. Who I’ve seen at a number of similar shows at the Millennium Centre

I was even introduced to a Christmas song I’d never heard of but that instantly became one of my favourites when Steffan sang “My Grown up Christmas List” check it out if you get a chance, especially if you like Country songs you will love it.