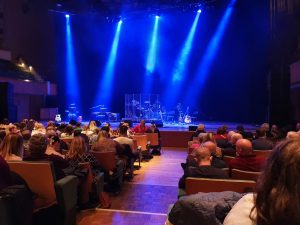 Lucie Jones is a wonderfully talented Welsh performer who came to fame when she appeared on the TV show X Factor a few years ago, she then represented the UK in the Eurovision Song Contest (a thankless task) but who has since transitioned into Musical Theatre.

I’ve been lucky enough to see Lucie in: Rent, Waitress and other concert performances. She has also played the lead in a tour of Legally Blonde.

I knew I was in for a treat with this show so I even booked a day off work and booked a hotel in Cardiff, as I knew traffic this close to Christmas would be crazy. So I stayed at the Easy hotel in Cardiff, it was clean, central and had a lockable room all that I was looking for really on this occasion and I would stay there again.

So after seeing the new version of West Side Story in the afternoon I headed to the St. David’s Hall.

The seat was great, and the show didn’t disappoint. With John Owen Jones as a special guest I knew it would be a great night’s entertainment.

I knew of Lucie’s voice but I didn’t know how funny she was, from initially walking on stage in a full length floaty (gimme a break I’m a straight male of a certain vintage what the hell do I know of dresses?!) dress only to lift the hem to show she was wearing her Doc Martins!

All the songs I had hoped for were there: “She Used to Be Mine” and many more, I was even introduced to a new Christmas song “ You’re a Mean one Mr. Grinch” and a great performance of the full version of Auld Lang Syne. These made for a great start to the Christmas period.