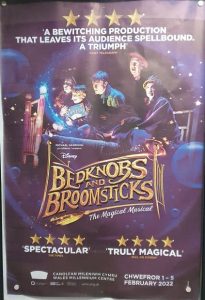 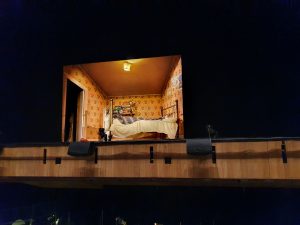 Bedknobs & Broomsticks is a new Disney Musical based on the film of the same name, released in 1971.

Now this was a musical I knew nothing about. Having never seen the film, and only recently seeing the short trailer that has been released.

To be honest one contributing factor for me booking was being offered a discount on the top price seats. The other factor was knowing the supremely talented Dianne Pilkington was playing the lead.

Now I realise how wrong I would have been if I had not seen this wonderful show!

Bedknobs tells the story of Charlie, Carrie & Paul Rawlins who are evacuated to the countryside when their parents are killed in a bombing during the blitz in London.

Arriving at the village of Pepperinge Eye they are placed with Miss Eglantine Price. During their first night, whilst planning on running away they discover that Eglantine is a witch.

Now I’m not going to spoil the plot by saying any more about how story progresses, so will switch to highlights for me. I’m saying these based on the fact if you’ve seen the movie, trailer or even poster you’ll know about certain aspects of the story.

For me I can’t say there were stand out characters as all the leading performers had their ‘moment’ in the story. The cast to an individual were excellent and the performances they gave were funny, warm hearted, unexpectedly (at least for this big softy) moving and of course their voices were excellent.

For me stand out songs were: “A step in the right direction”, “The age of not believing”, “Emilius the Great”, “Portobello Road”, the only song I knew in advance “The Beautiful Briny” and “Nobody’s problems”.

As I’ve already said the cast were excellent. Now I knew Dianne Pilkington would be as I’d had the pleasure of seeing her in: The Beautiful Game, Tonight’s the Night and Young Frankenstein. So her credentials as a performer were one of the reasons I went to see this show. Charles Brunton was also excellent and never having seen this gentleman perform before I hope it isn’t too long until I get to see him again. He brought the humour of the character and also the emotion of his decisions towards the end of the show.

Now the other aspect which I must mention are the effects. Now as I have said a few times I’ve never seen the movie. However even I knew there was a flying bed. Add to that the flying broom, and dancing items of clothing and you have a truly magical evening at the theatre.

Oh and I was front row, damn near centre and I have NO CLUE how the heck they did it, and I’ve been going to the theatre for over 30 years. I mean I know flying is either wires or a ‘bar’ hidden but when the Broom is taken from a table (so no wires) and appears to try to lift Eglantine off the floor, they couldn’t have a bar as I’d just seen it taken off the table in front of her. Then she throws it away it lifts off the floor, spins and returns to her and then she flies high above the stage, I was like … ?? … ????. Wonderful!

So I’ll round up by saying, if you’ve seen the movie, read the books or have done neither go and see this truly magical evening at the theatre!