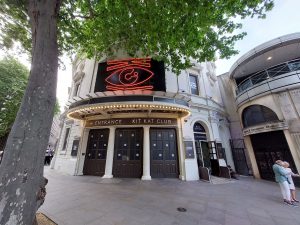 Okay so Cabaret is one of the classics, and I’ve seen a number of previous incarnations over the years. Rarely has there been such a ‘buzz’ over a new production as the current incumbent of the Kit Kat Club. The totally redesigned Playhouse theatre in London’s West End.

Originally staring Eddie Redmayne as ‘Emcee’ and Jessie Buckley as ‘Sally Bowles’ this show had been not only the “talk of Mayfair” but the talk of the Musical theatre world online since it put tickets on sale at the frankly eye-watering £340 each. This being for a table where you had to buy both seats!

Now I must admit it was not top of my must see, especially at those prices. As although I like Eddie as an actor it was not something I felt I could justify. To be honest I was more interested in seeing Jessie. However after seeing the ‘new’ Sally in the guise of Amy Lennox at the Olivier awards I was more inclined to look into options of getting a ticket.

So role around the month of May, when Rob gets a new digit in his age, so I looked and found there were some seats showing as available, so I distracted my bank manager’s gaze and paid more for a single ticket than I ever had in over 30 years of going to the theatre (£103.00), and this for the second cheapest seats in the theatre!

So for those who haven’t seen this show before it tells the story of Clifford Bradshaw an American who finds himself in Berlin just before the start of World War 2 and the characters he meets when he visits the Kit Kat Club including the English singer Sally Bowles. Their relationship is told against the backdrop of the rise of the Nazi party.

Now done correctly this is a disturbing, moving and powerful piece of musical theatre. This production elicits all these emotions at various points and the staging is unique.

To start with you enter through the stage door and come up from under the ‘stage’ entering the totally redesigned auditorium. This production is performed in “the round” with seats all around a central circular stage area.

However before you even get to the auditorium you are greeted with actor / musician / dancers at various points, in dark corners, behind sheer curtains and dancing on the bar as you are being served.

They certainly evoke (what one would imagine was) the atmosphere of 1930’s decadent Berlin.

So my seat was Dress Circle row E seat 6. Now the view was great, the leg room not too bad, unfortunately I don’t have a photo from here as when you enter through the stage door they put a sticker over the camera on your phone that says “keep it in the Kit Kat Club” and ask you to not remove it until you leave.

So I knew I liked this show having seen a few tours over the last few years, and all the normal aspects were included. Stand out moments for me were as always, (my favourite song) “Maybe this time” and a tour de force version of “Cabaret” by Amy which having seen her sing this on the Olivier TV show made me bite the bullet and buy a ticket.

All the cast were very good, Fra Fee as Emcee had the right amount of menace at the required points, and the other cast all committed 100% to their roles.

However, for me the individual parts didn’t add up to as exceptional whole as I was expecting after all the buzz, and frankly for the cost.

Performing in the round was done well in that the performers ensured they faced all ways at different points during each scene / song. However I found it lost some of the power I had felt in previous productions.

Now before you read on **SPOILERS AHEAD**

I found that way that Emcee together with the rest of the cast transformed during the show, ending up more as an ‘everyman’ by the end, I would assume to show that “this could happen to anyone” if you don’t pay attention didn’t have the visceral punch that the last two tours had.

The last scene of these previous productions with large letters at the back of the stage dropping with loud crashes leaving only a central point that all the cast walked into naked while the ember’s from the infamous ‘showers’ dropped around them was much more powerful.

I honestly believe if this production had ‘normal’ price seats, especially if I was able to get ‘day seats’ I would have enjoyed it more. Being able to give them the credit for trying something new, even if it didn’t connect personally with me as much as previous versions had.

However when you have a seat that cost me as much as I paid for 3 other West End productions during a previous visit, you really have to be something exceptional to warrant the cost, and despite the stellar work of the cast I found that this production just didn’t do it for me.