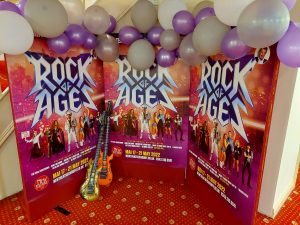 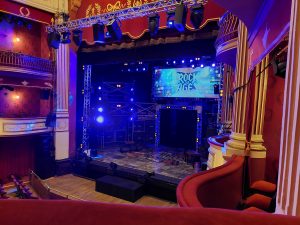 A Rock musical featuring 80’s Rock numbers played at ear splitting levels and featuring a cast of uber-talented performers with more hair that me, and those that know me know that’s saying something!

The story is your basic boy meets girl, loses girl after finding said girl in a toilet cubicle with a Rock star, who had allegedly (save myself a court case) had carnal knowledge of a lama! You know the sort of show.

Where this production really clicks for me is the ‘Lonny’ character acting as narrator as well as being a character in the show. Regularly breaking the fourth wall to interact with the audience. Joe captures the quirks of this character perfectly, and his naughty interactions make the show for me.

All the cast were excellent and one person who stood out for me was Erin Bell as ‘Regina’ she is a swing / cover of this role but her voice, in a show of great voices was a powerhouse and she is one lady I will certainly keep an eye out for in future roles.

This is a great fun, NAUGHTY night out for those not easily offended, as to say the humour can be near the knuckle is missing the fact that it’s actually closer to the .. Shoulder!

Let your hair down and go for a night of 80’s power anthems.