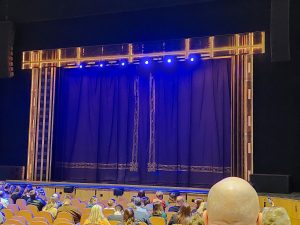 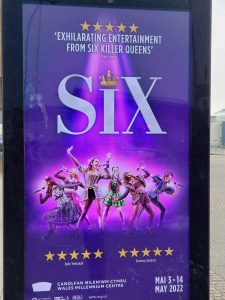 Cast: (NB These are from the website as there was no cast board when I attended, so I believe these were the cast I saw) ‘Catherine of Aragon’ Chlöe Hart, ‘Anne Boleyn’ Jennifer Caldwell, ‘Jane Seymour’ Casey Al-Shaqsy, ‘Anna of Cleves’ Jessica Niles, ‘Katherine Howard’ Jaina Brock-Patel, ‘Catherine Parr’ Alana M Robinson,

Now Six is the story of the six wives of Henry the VIII, told from their point of view. It is musical in so much as there are songs that tell the story, it’s closer to a pop concert in presentation with all the wives being on stage with a live band stepping forward to tell their story while being backed by the other wives.

This show is exceptionally popular with the younger female demographic who have gravitated to the ‘girl power’ presentation of this historical story.

I was able to play the ‘funcle’ role (fun uncle to the uninitiated) as I took my niece to her first show, with me, and I think only her second show ever, the previous one being a school trip a number of years earlier.

She loved it and couldn’t stop talking about it all the way home. Which truly made my week as I had someone coming close to my love of the genre in the family. I mean the only way I could get my brother back to a musical ( I did persuade him to attend Jesus Christ Superstar years back, when Steve Balsamo played the lead role as he was Welsh, and then Steve wasn’t performing that show! Ouch.

However I digress Emily loved the show and when getting out of the car said “I’d love to see other shows” Yes Win for the Funcle!

This is a high power, high octane, loud, in your face assault on the senses and I loved it. The cast were talented, the songs catchy and I even learned a thing or two. What’s not to love.