Well the Welshman returns to London again, and it’s definitely been too long. I now am not a self employed person skiving but a fully employed Civil Servant taking leave… sounds posh but really I work in a Jobcentre and managed to get a few days off. That’s the background, now to the trip.

Well I arrived in Addleston, my base as regular readers will know, early evening Tuesday 30th March and after a Chinese was immediately whisked off to the National finals of a Karaoke tournament, who says this guy doesn’t appreciate culture :o). The guy who won, even though he wasn’t the one I went to support, was very good, a great version of “Stand by me”.

The Next morning I surface at 10:00am….. Gimme a break this is supposed to be a holiday, and venture into London at about midday. At this point I went show crazy and managed to spend just under £100.00 in less than 40 minutes. Tickets for “Whistle down the Wind” for that evening, & ” Buddy ” for Friday evening. This is where I met my first dilemma what to see as a matinee on a Wednesday, since I realised that my first choice Les Mis only has a matinee on Thursdays & Saturdays. I scanned the listings and brought it to a choice of “Chicago” or “Saturday Night Fever”, “Chicago” won. I wandered the streets for a while, mostly stayed near Covent Garden this time and watched the street entertainers; very good most of them were too.

Then to the Theatre. “Chicago” is a show I’ve wanted to see for a while, preferably when Ruthie Henshall was in it, she isn’t now but to give the present cast credit within 3-4 minutes of the start of the show I didn’t miss her. The current cast led by: Maria Friedman, Nicola Hughes, Michael Siberry & Peter Davison are excellent and carry this vibrant and VERY energetic show at one hell of a pace, I was knackered, tired for those non Brit’s amongst us, just watching them. 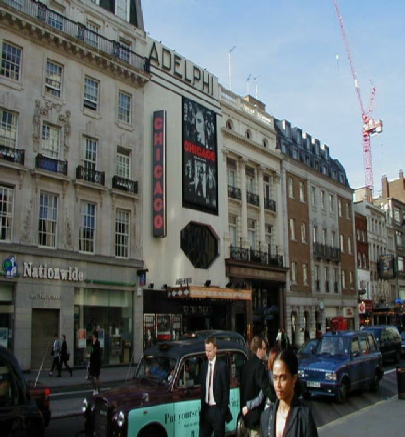 The story of “Chicago” is about a group of Killers and the story of their TRIALS and tribulations [ sorry I couldn’t resist it :o) ] High points of the show for me were the high kicks by Ms.Hughes – I didn’t think legs went that high! also the ventriloquist number with Ms. Friedman and Mr. Siberry, Mr. Cellophane with Mr. Davison [ and I can honestly say I didn’t think of “Dr. Who” once…at least not while watching the show. ] and Cell Block Tango with”Velma & the girls ” now these aren’t in the order they appear in the show but in the order I remembered them. But it must be said that the show as a whole was excellent, the cast all of whom appeared in this matinee, a rare occurrence in its self, were very talented and the staging with cast members appearing from half way up the sides of the stage was entertaining.

A really good feel good show with plenty of life, and the type of costumes that would make it difficult to listen to a less talented cast. Final mention must go to the Musical Director Mr. Valentine who is worth the price of admission alone for the Entr’acte. Go and see what I mean.

Wandered London again partook of a few light refreshments and a Kentucky Fried Chicken meal [ told you I was addicted, see previous reviews ] and then it was to “Whistle…”

Now I’d seen this before and was very impressed I knew when I booked that Marcus Lovett would not be performing neither would the actor who played “Swallow’s father”. This didn’t bother me too much as I’d seen them the last time, I was relieved that Lottie Mayor was performing as I think she’s great [ side note here does anyone know how old she is really?? ]

I chatted to a nice Lady from the States prior to the show, both of us commenting about the lack of room in the seating. Sorry but I didn’t catch your name, if you read this drop me a line I’d like to know what you thought of the show. I was the 6′ 3″ Welshman at the end of the row.

To the show Well Marcus Lovett as great as he is was not missed, as Nicolas Colicos commanded the stage and made the role his own. The gentleman who played Swallows father was okay but did not have the power or range of James Graeme. Lottie Mayor was again excellent the story for those who don’t know is about a group of children who find a man in a barn and think he’s Jesus. A simple story joined with other strands that deal with the lives of the families of the children who find him, how they want to leave the town or find something thats missing in their lives. I can’t say I’m a massive Andrew Lloyd Webber fan but I do like “Starlight Express” and I really like this show. High points include…my inbuilt editor has just kicked in ’cause I nearly typed almost every song in the show. Let’s put it this way the only bit’s I think don’t work that well are the big production numbers with the adults, when they are searching for “the man” usually on a split stage I just find them overdone, apart from that one of the best shows in the West End.

Well to day 2 of the trip, I arrived at London later, at about 5pm in fact. As this was not a day for Theatre this was a day for one of my other great passions …….checking out the Pubs of London.

I was meeting with my brother and a few of his friends from work and we went to a pub I can’t remember the name of, but it was just along the street from New Scotland Yard, great place and it was there I saw one of the great wonders of London …..I saw a Chelsea Pensioner “pull” . The Gent was just sat there and over walked a young lady and just sat on his knee….. What we can learn from our elders!

From here the 2 Welshmen [all the Englishmen having gone home.… couldn’t stand the pace I think :o)] headed for Central London to meet with another Welshman.

After a Kentucky fried chicken meal [you’d think with all these plugs they’d get the message by now and give me a sponsorship deal wouldn’t you, but not a word] we arrived at “Walkabout”, and met with Gareth Phillips I give him a name check as this is a name you should look out for.

He is an actor, starred in “Grange Hill” a few years ago and is a brilliant performer, definitely someone to look for in future cast lists! The fact we met was quite an achievement as I’d told him the pub was called “the Outback” its name in a previous life. 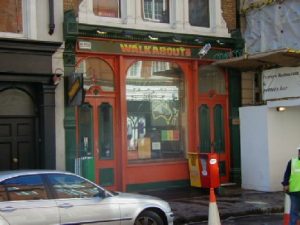 This is a LOUD! Pub, the music, the atmosphere and I LOVE IT, not just because there’s Aussie rules football on almost every day [a game I know even less about than Rugby! I know a Welshman admitting this is sacrilege, but as we won against England this year, I’m on a safe bet that no English person will have read further than the word Rugby 3 lines above because it was written by a Welshman.]

From here we went to the Rock Circus and in here hangs a tale. I’d always wanted to visit the Rock Circus, sit outside and enjoy the atmosphere of Covent Garden while trying to drink England dry. I got to the door first and was told there was a £5.00 entrance fee as there was live music that evening, which was okay till we paid walked in, found out we’d paid to enter an underground Night club where the band didn’t appear on stage for 2 hrs. This would not have been too bad if it were not for the fact the booked band did not turn up, the support band was terrible [sorry who ever you were] and we left half way through the first number. Final port of call was “Punch & Judy” Now this was my type of Pub, big, bustling and full of atmosphere spread over at least 2 floors with a balcony, that was too full for us to get on, it was great. End of the evening, onto a tube….. the wrong one! Oops, and a taxi ride from Hounslow to Addleston.

Last day. Well it was a late start again. I’d booked a film from the local video shop. X-Files the movie for anyone who’s interested, a good movie. And it was to London at about 5pm again. Big mistake, my show “Buddy” didn’t start until 8:30pm so I had hours to kill. Stuck to Covent Garden again. The Pan Pipe band who played outside the Rock Circus are great, definitely worth seeing if you’re about and they sell CD’s of their music. 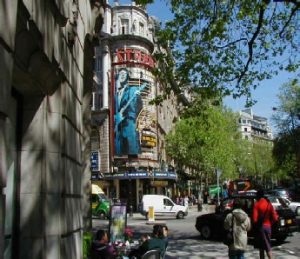 Now to “Buddy” Well I’d seen the shows years previously in Bournemouth on a family holiday and really enjoyed it. So I booked a seat, a front row seat and in this specific instance this was a mistake, as mentioned previously I am 6′ 3″ and the person selling me the ticket said ” you’ll have to look up a bit ” Well he was right in a BIG way the stage was about 4 feet plus high so when sitting down even at my height I could barely see the back of the stage.

This little quibble aside the show was everything I remembered, fast, nostalgic, marvellous songs, THE, real feel good show of those presently on in the West End. I know this is a weird thing to say about a show where the main character dies in the end but the way they’ve staged this is excellent. They never fail to get people dancing in the aisles this guy included.

As to the Cast – Angus Macgregor “Buddy” was to miss quote from the Sun “Buddy Brilliant ” the supporting cast were obviously having fun, the lady playing his wife was gorgeous. The show shows no adverse signs of its 10 year run. Best parts – “True love Ways”, the recording session with Norman & Vi Petty and of course the finale.

As I was leaving the Theatre still buzzing, I really missed not meeting with a friend of mine, she knows who she is, I hope your better and if you tried to ring me my phone was on but there was a fault with Cellnet for incoming calls, which I didn’t find out about till mid way through the day and which I could do nothing about, sorry.

The train journey back was an education – it taught me NOT EVER to catch the last train of the evening when you’re on your own! Not a pleasant experience. The member of staff who came along the train to check whether people were in the correct carriage was never so welcome. I for one will be sticking to the tube from now on, don’t ask me why I feel better on the tube, I don’t know. I’m being honest not macho. That was the end of this trip. I have two more planned for this year which should be great, 1 in July and another in August. So anyone there 10th – 18th July, or, 31st August – 4th September who wants a chat drop me a line. Also anyone wanting a general chat about London, Theatre etc, feel free also.