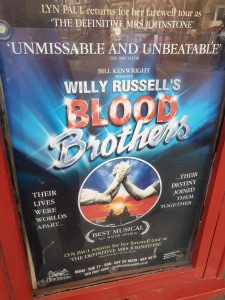 Blood Brothers ran for many years at the Phoenix Theatre in London, and used to be my ‘go to’ matinee upon arriving in the big city. As you could almost be guaranteed to walk up, buy a ticket and walk right in, and I knew I would enjoy it as I have seen the show many times before.

This tour is a farewell of sorts, not for the show luckily but for the leading lady Lyn Paul, she of New Seekers (want to teach the world to sing) fame. She has played ‘Mrs Johnstone’ many times both in the West End and subsequent tours.

I saw this show on a Thursday evening at one of my local theatres, and have to say I did not notice any ‘cut backs’ in the touring production. The cast were very talented and ‘on it’, the set was as I remember in London except the orchestra were in the pit as opposed to being raised in the wings. I did not notice any reductions in said pit either. Now I have seen a touring production, no names no pack drill, with one keyboard, one guitar and 2 members of a brass section. Now this show is synth based, or at least sounds it to the untrained ear and it sounded no different to me than in London.

The story for anyone who hasn’t seen it, is of a mother who after having about 6 kids is left by her husband shortly after finding out she is expecting again. Now she believes that she can just about manage another one child, but when she finds out she is expecting twins she panics.

Having just started a job for a ‘nice’ lady who is much better off and desperate to have children she is persuaded to give one of them away.

Stand out numbers for me, as always were: “Easy Terms”, “A Light Romance” and of course “Tell me it’s not true”. The one thing I noticed with the latter and it may just be my memory playing tricks, but I remember it being a solo tour de force for the leading character, however in this production it started with the leading lady but as it built the whole cast joined in. Now Lyn did appear to have a cold on the night I saw the show so it could have been that, or as I say it may have always been like that but I didn’t remember.

If you get the chance and you like musicals definitely go and see this show on one of its tours as it really is one of the greatest and a real must see.