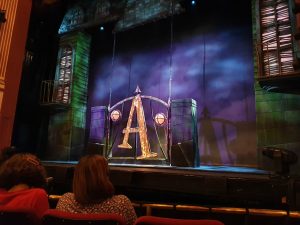 The Addams Family music and lyrics Andrew Lippa, book Marshall Brickman & Rick Elice. Based on characters created by Charles Addams and made famous in his cartoons, before being turned into a successful TV series and then latterly movies.

Now I’d seen this show in a previous tour when Carrie Hope Fletcher played one of the leading roles ‘Wednesday’. So I knew I would enjoy it. It’s a fun night out, with some great songs and really funny moments.

For me all the cast were very good but Cameron Blakely is just SO funny. The way he managed to crack up Joanne Clifton as ‘Morticia’ was a highlight of the show. The newcomer Kingsley also made the role of ‘Wednesday’ her own.

Finally special mention to Scott Paige who covered the role of ‘Fester’ during the last tour and played it for a few weeks when Les Dennis was unwell is a true star in the making, his comedic timing, great voice and the emotion he brought to what is a larger than life comedy role was brilliant.