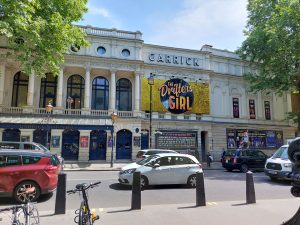 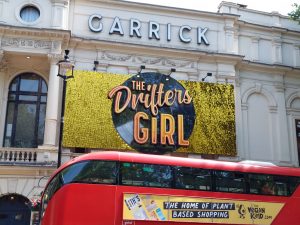 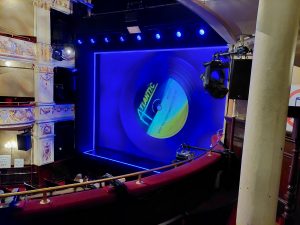 This new musical tells the remarkable story of one of the great bands of the 60’s and early 70’s, The Drifters.

Now being of a vintage, no not old enough to remember the 60’s (I was born in 1967!) I remember this band from seeing them on a range of TV shows in the 70’s and 80’s and thought they had some great songs. However I had no idea of their back story.

They were the original ‘created’ group, with a revolving door of members over the years and managed by the formidable Faye Tredwell.

The cast listed above were the total cast. No one else appears on stage, with the members of the Drifters playing all the other supporting roles from the desk clerks at hotels to waitresses in diners as well as the variety of managers, agents, record company execs who they come across.

The music in the show is great, and I knew I’d like it as I love the music of the Drifters, so I knew I was on a safe bet there in booking the show. My favourite songs included: “Stand by me”, “Saturday night at the movies” and my personal favourite “There goes my first love”.

Now to Beverley Knight, well this lady is the definition of a powerhouse performer, she almost never leaves the stage and has some great moments from acting the trials and tribulations Faye faced, to the new original numbers she has in the show: “Harlem Child and the goosebump inducing “I don’t want to go on without you” which brought the house down at the end of Act 1.

A great show I would happily go and see again. Any fan of Jukebox musicals, 60’s music or just great modern Musical theatre should go and see this show.

My seat was Dress Circle Row C Seat 1, now this was a mistake on my part. I had managed to get a ticket using the Today Tix app, Row D seat 7 (almost central), so £25 for a seat that on the website is £45. However knowing what the leg room (or lack of such) can be in some venues I went to the box office and asked if I could swap to the end of a row, they were very helpful and swapped me.

Only when I got there the leg room in the Dress circle at this venue is great, and the curvature of the auditorium meant I lost the far right hand side of the stage. So, things happen, and that’ll teach me. I was lucky in that the next 2 seats in weren’t taken so 20 minutes in I moved and the view was better.