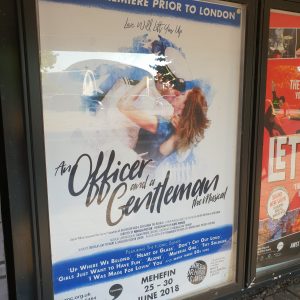 An Officer and a Gentleman

So another new show for me. This time, as seems to be the want of Musical Producers these days, it’s another “based on the movie”, this particular movie being the 1982 Oscar winner of the same name.

This production is by: Jamie Wilson, Anthony Clare, Gavin Kalin, Jason Haigh-Ellery and Broadway Baby Productions. The producing theatre is Curve and it is directed by Nikolai Foster, with choreography by Kate Prince, Musical Supervision Sarah Travis. The writers are Douglas Day Stewart (co-writer of the book and original screenplay) and Sharleen Cooper Cohen.

The cast are led by: Emma Williams ‘Paula Pokrifki‘, Jonny Fines ‘Zack Mayo‘, Ray Shell ‘Emil Foley‘, Ian McIntosh ‘Sid Worley‘ and Jessica Daley ‘Lynette Pomeroy‘ ably supported by an excellent supporting cast. With a live band this production is different from the first which premiered and flopped in Australia a few years back as instead of trying to write original songs it features classic hits of the 80s.

I will say through with some subtle, and not so subtle lyric changes (“In the Army now” becomes “In the Navy Now”!) they fit really well. Other songs featured include: “Girls Just Wanna Have Fun”, “This is a Man’s World”, “Kids in America”, “Alone”, “I don’t Know but I’ve been told” and of course “Up Where we Belong” the theme from the movie! But for me the song that connected the most was a little known (by a large percentage of the population) “Don’t Cry Out Loud”.

The story for those who don’t know, which basically means are too young! Is of a Navy brat (son of a lowly navy guy) who enters the pilot training officer programme, and of the Puget Sound Debs, the girls from a local factory who come over on the weekends to try and catch themselves “A Navy Avi-A-TOR” (the weird caps are an attempt at an impression from the film! 🙂 ) and of the relationships between ‘Zach‘ & ‘Paula‘, ‘Sid‘ & ‘Lynette‘

The film starring Richard Gere, Debra Winger and Louis Gossett Jr. was a phenomenon at the time of release, a relatively low budget film that caught the zeitgeist of the time and became a massive hit. Helped in no small part by the now iconic last scene, no spoilers, but if you haven’t seen it, all I’ll say is it’s right up there with “no body puts baby in the corner”.

Go and check out this, great, loud, fun, moving evening of entertainment.