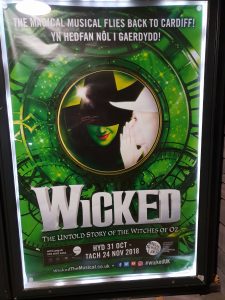 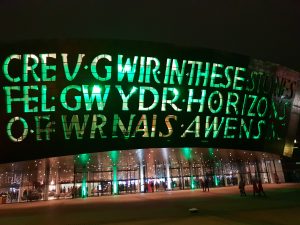 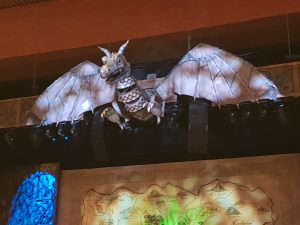 I believe: Amy Ross ‘Elphaba’ and Helen Woolf ‘Glinda’ supported by Aaron Sidwell ‘Fiyero’, Steven Pinder ‘The Wizard’ and (on the tour) ‘Doctor Dillamond’, Kim Ismay ‘Madame Morrible’, Emily Shaw ‘Nessarose’ and Iddon Jones as ‘Boq’. I say I hope as unfortunately I was not able to find a board confirming the cast on my visit.

Now I’ve reviewed this show elsewhere on this site, so I will merely say that It was as good as I remembered, with an excellent cast. As spectacular as the West End production I’ve seen. The only downsizing that was noticeable was (it appeared) a few less flying monkeys and a double up of the role of Wizard / Dr. Dillamond (although with the make-up I’d defy his mother to notice this if it were not credited in the programme).

I was in the raised stalls with a great view, if not a great group to be sat with, at firsst I thought I was sat amongst a large family. However by the interval I realised it was a youth club or church group outing. Now to be honest 90+% of the people were great, however I was sat next to an older lady who had a young boy her other side who spent the majority of the show (loudly) asking questions: “Who’s that”, “Who’s She”, “What are they doing” !!

I took to puttng a finger in my left ear to dry and reduce the disturbance. Thankfully he was a little quieter in the second half, and over all it did not completely affect my enjoyment of the show.

As usual stand out numbers for me included “I’m not that Girl” and or course “Defying Gravity”.