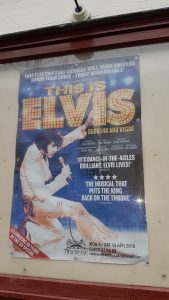 Now this is the Musical, not the movie. Now I have the movie, I am that big a fan! I mean the movie was a made for TV cash-in after Elvis died by the Colonel, using home movies, key TV performances and re-creations of key moments in his life with look a likes and actors. Anyway I digress, the movie is one for completists where as the Musical is one for all fans of Elvis or indeed a great night out!

The action starts with the recording of the ’68 Come Back special, and continues immediately afterwards and at various points culminating with Elvis opening at Vegas.

The lead is Steve Michaels, and I have to say, as one who doesn’t really like EPs (Elvis Impersonators) in the Elvis fan world. Rider here, unless they are very good and don’t overplay the old tropes “Thank you very much” etc. However I needn’t have worrried this guy is great! He looks the part has a great, and very accurate voice, and can carry the performance scenes as well as belting out the hits.

Ably supported by a cast of talented actor / musician / dancers who amongst them are truly the definition of triple threats.

The show is staged, with a set for the ’68 special, backdrops representing: Graceland and hotel Rooms, and then the ‘full’ stage for Vegas. The story starts immediately before the live performance at Burbank Studios and then features a number of songs from this iconic show, then there are some other songs that are put in during ‘rehearsals’ for the Vegas show, then after the interval you are treated to the ‘full’ Vegas performance running over an hour and what really is the definition of high energy performance, the guy must be knackered after this nightly and twice a week twice daily! There is no mention of an understudy or alternate, so his stamina is to be applauded and marvelled at.

I can’t really pick out “stand out” numbers for me, as being an Elvis fan I loved … Okay ‘American Trilogy’ I LOVE that song 🙂 But it was a show I went into hoping not to cringe too often and left loving, and wanting to see again.

Check it out on it’s continuing tour if you get the chance, oh and one final thing, this is another example of a great touring production by Bill Kenwright, who in my opinion gets an unfair reputation for scaled back and poor shows.