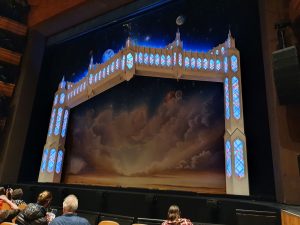 It tells the (fictional) story of the Church of a group of young men who go out as missionaries to spread the word of the church of Jesus Christ of Later Day Saints.

Now this show is the definition of go “if not easily offended”, I mean if you’ve seen the other show this team did ‘Avenue Q’ you’ll have an idea. However this one is worse / better / MORE depending on how you look at it.

I’ve seen this show a few times before and written reviews of it. So check London trips and you can find what I thought of the show.

Oh and one thing that was different, in London and previous tours the Church of Latter day Saints had taken out an advert in the programme saying basically “you’ve seen the show now read the book” but for this location there were real members of the church outside after the show trying to pick up members .. for me the definition of optimism.